What is a Merle? How is it different from a Harlequin? Where does Whites come from? What is the problem with White? Is there a problem with Merle?

Many Dane owners or would-be Dane owners do not have the correct answers to these questions. Social Media is rife with people who think they know and who frequently confuse the issue more than is necessary.  Merles are often seen as poor or bad, when they are very far from it. 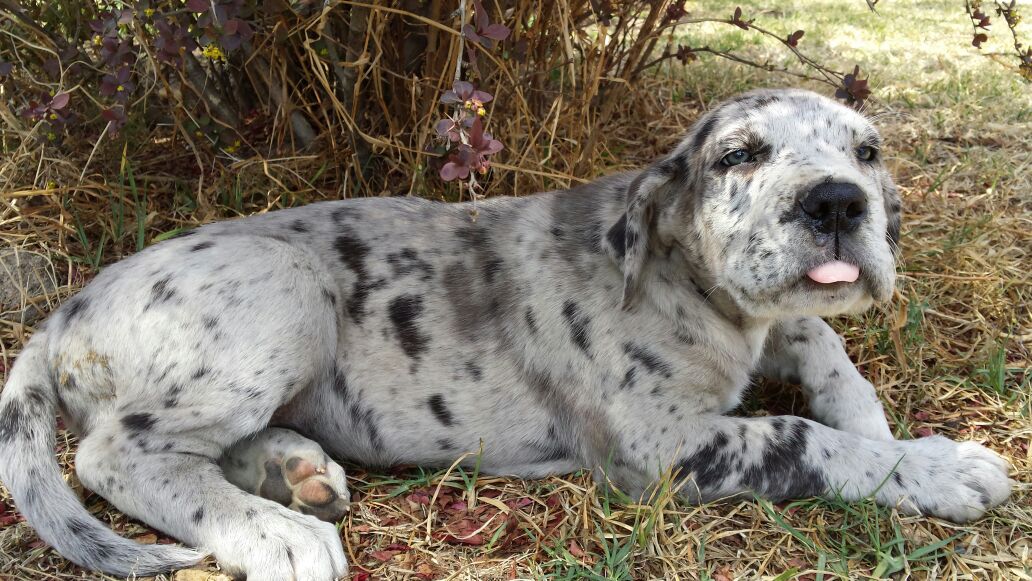 A merle is a dog with one M (merle) gene. This causes solid torn patches of the base colour of the dog on a mottled background. The Merle colouring only manifests on black or blue (diluted black) and not on red (this would be Fawn in Great Danes). Thus a fawn merle looks just like a normal fawn (something we will get back to later).  The only place on a fawn where you will see the merle is on the black mask. We can simplify the genetic code as Mmhh.

A Harlequin is a merle dog (one copy of the merle gene, M) with one copy of the harlequin gene (H). The harlequin gene basically bleaches the mottled colour to white, leaving you with a white dog with torn solid colour patches on it. The H bleaching is never 100% and thus a real harlequin will always have at least one merle patch on its body. It might be very small, it might be large, but it will be there. 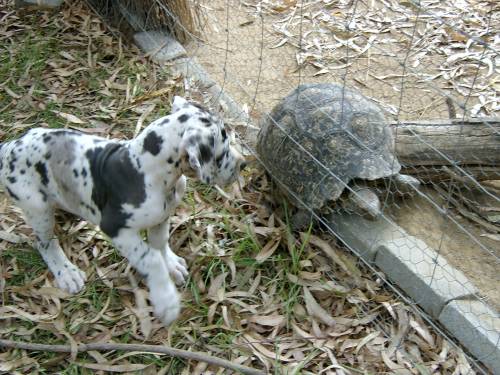 Harlequin Pup with large merle patch on his side.

The simplified genetic code for a harlequin is MmHh.

Double-merle white Great Danes have two copies of the merle gene. This causes excessive loss of pigment and this, in turn, is linked to sensory defects. Many double merle Danes are blind and/or deaf, or have poor sight and hearing. Double merle Danes tend to be very white and many have deformed eyes. Some double merles are what they call merlequin – a white dog with merle patches on it. 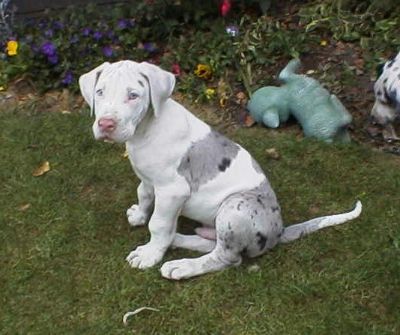 Double merle Danes are caused by the breeding of two dogs, each carrying at least one copy of the merle gene:

The genetic code for a double merle is MMhh or MMHh

The problem then, is not with Merles as such, as many are led to believe. It is with doubling up on the merle gene. Ethical Harlequin breeding frowns upon breeding two ‘spots’ (Harlequin or merle). The accepted practice is to mate your ‘spot’ to a black or a Mantle dog. In this way there can be no double merles.

This brings us to the merle fawn issue. Since a merle fawn looks just like a solid fawn, the danger exists that one might breed this dog to another merle fawn unknowingly and end up with a fawns, fawn merles and whites. This is one of the many reasons there are specific colour families in Great Danes and one should not cross those boundaries without doing genetic testing and understanding exactly what you are doing and why.

If you would like to know more about basic colour genetics in Great Danes, this article is still one of the best